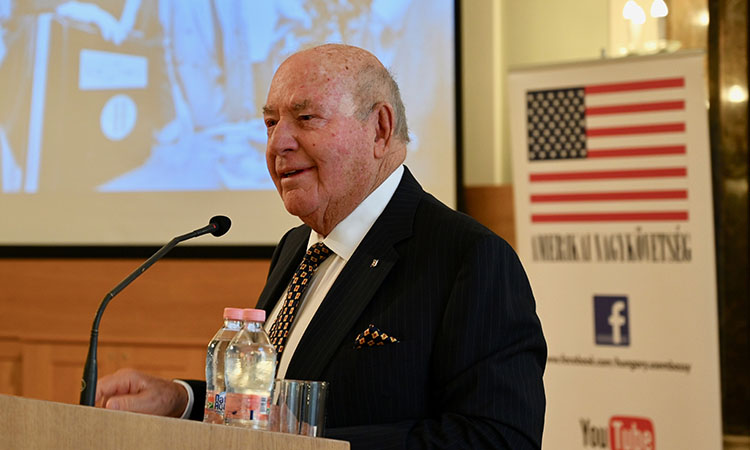 Opening Remarks of Ambassador David Cornstein at the Fulbright Conference “Breaking Down Walls, Building the Future”

I see a lot of young faces in the audience, that is terrific! That’s wonderful to see so many young people. It reminds me of last night, before I went to bed, I called my young grandson and talked to him, and he asked me ‘What are you doing tomorrow?’ I said I’m going to be speaking to a lot of young people tomorrow, and I asked ‘What do you think I should talk about to these young people?’ and he thought for a while and said ‘I think you should talk about two minutes.’ So, I’m going to talk a little longer than two minutes, and forgive me for reading this, normally I never read a speech but it’s such an impressive [group, that I will] read this today instead of just shooting from the hip as we say.

Thank you for coming to this event to commemorate the 30th anniversary of Hungary’s political and economic transition in 1989.

It is good to see so many young people in the audience. Many of you were not even born when the Berlin Wall fell in East Germany and the system change took place in Hungary. But what happened back then still defines our daily lives – in Hungary, the region, and in the United States as well.

For more than 40 years, we and western Europe were enemies with the Soviet Union and the communist eastern bloc countries. Much of my life was lived during the Cold War and marked by mutual suspicion, an escalating arms race, and fear of the outbreak of nuclear war with the Soviet Union. During those years, very few Americans traveled behind the Iron Curtain. There was little trade and commerce between our countries – after all the countries were communist – private enterprise is not prized in traditional communist systems!

We had much less opportunity for people to people interactions and exchange, although we had some rays of hope, notably the Fulbright program was allowed in Hungary beginning in 1978 although it was heavily controlled by the government.

The events of 1989 were an inspiration to all of us across the world. It turned out to be the year that freedom and democracy were finally triumphant in the countries of Central and Eastern Europe. It was the year that the Berlin Wall fell and the Iron Curtain lifted. That year Europe was reunited after more than 40 years. For the United States, it was an immensely hopeful time.

In the 30 years since the end of the Cold War, we have become partners and friends with Hungary and the countries of this region. We have built a shared future based on common values and common goals. Hungary as you all know has experienced incredible change in that time. It is a member of the European Union and NATO, through which we have a strong defense partnership.

We have a thriving trade relationship with Hungary and constant cultural and educational collaborations and partnerships. In fact, Will Smith was just here giving a concert in front of the Basilica! That is not something we could imagine at the height of the Cold War.

This conference in particular highlights the academic partnerships we have built with Hungary over the years. Many of the speakers today are alumni of the prestigious Fulbright program and distinguished scholars in their fields. One of the positive outcomes of the end of the Cold War has been the ability to freely exchange ideas. Sharing knowledge, researching together, and learning from one another is the foundation of the Fulbright program, so it is very fitting that the Fulbright Commission would take the lead in organizing this conference focused on 1989 and the transition period.

It is as important today as it was 30 years ago to talk about freedom and celebrate it. As Ronald Reagan once said: “Freedom is never more than one generation away from extinction.” We who remember the Cold War and the division of Europe must pass on our memories and our lessons to the next generation, so that freedom and democracy can continue to thrive in Europe. That is what today is all about. I am certain it will be a fruitful day of talks and discussion. Thank you for having me and enjoy the day.