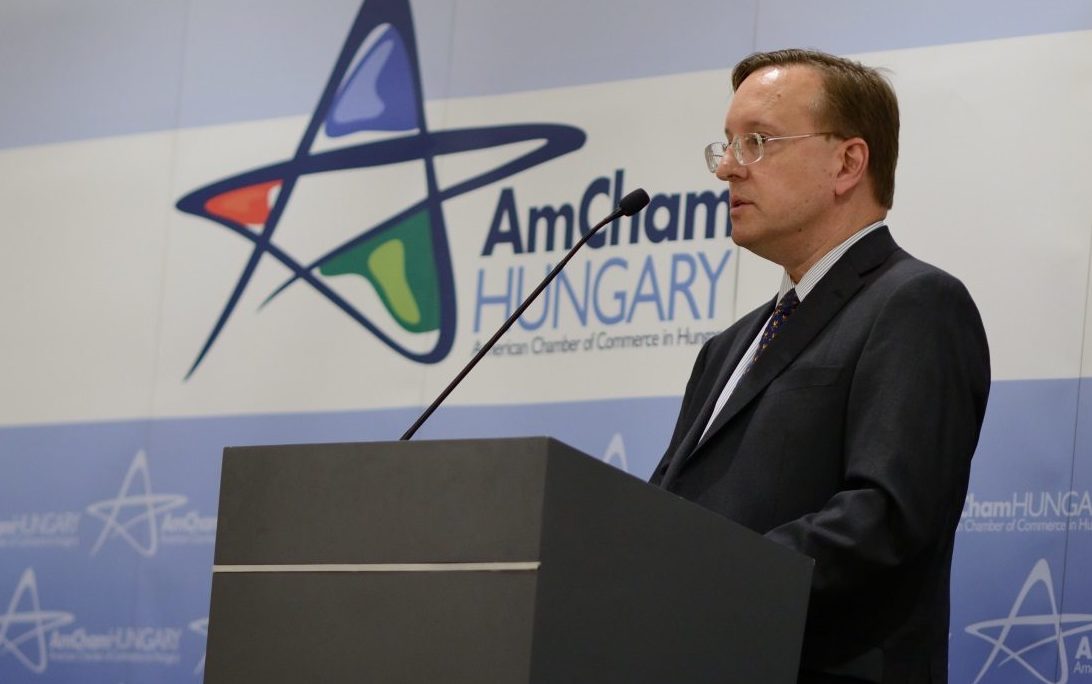 Good afternoon, dear guests.  On behalf of the U.S. Government, I offer my sincere thanks to Farkas [Barsony, AmCham President] and to Irisz and her team at the American Chamber of Commerce in Hungary for your excellent work in advancing commerce between our countries.

And I’m honored to share the stage with Deputy Minister Szabo.  Laszlo– soon to be Ambassador Szabo– and I have developed a solid working relationship in recent months, as he prepares for his upcoming assignment in the United States.  We look forward very much to having you in Washington, DC and working in tandem with the breadth of the U.S. Government to strengthen our ties.

With his private-sector background in the United States and his experience with trade promotion, Laszlo is uniquely positioned to help advance our trade ties.  I think his appointment as Hungary’s Ambassador to the United States shows how seriously our Hungarian partners take this issue.

I’ve served almost a year in Hungary and I’ve come to admire Hungary’s sharp focus on strengthening bilateral trade and investment, as this is also a top policy priority for the U.S. Government.  I think you’ve heard this statistic many times, but it’s one we like to emphasize, because it is significant:  American businesses here employ close to 100,000 Hungarians, making the United States the second largest investor in Hungary.  These investments are good for both of our countries.  American businesses here contribute to economic growth, they introduce good business practices, they pay taxes, they are active members of local communities, and they create well-paying jobs for Hungarians.  That is very important.

I’ve had the pleasure of visiting many of the American companies that are flourishing here, such as GE, Citi, IBM, and newcomers such as BlackRock.  The executives that I meet with compliment Hungary’s business friendly environment, its central location, and its skilled workforce.  They also appreciate the help they receive from the Hungarian government.  Companies are far more likely to succeed and grow if they can work with a government – which is the case – that cares about competition and innovation and that can help with finding new partners, making sales, and launching investments.

Some of the things that have been happening recently:

Clearly, there is significant interest in more trade and business development between our two countries, and as a government we are committed to doing everything we can to turn this interest into actual investment decisions.  The U.S. Embassy here in Budapest is very committed to helping in any way we can.

Naturally, the immediate focus of our conversation today is business, and the words of the day are “trade,” “investment,” and “growth.”  From my interactions with business leaders, though, I know that there are a lot of issues that factor into investment and trade decisions beyond explicit commercial considerations.

Not all of these programs and initiatives make headlines, but they represent an extensive commitment of resources and energy on both sides, all with the goal of building and maintaining a very healthy and functional friendship between the United States and Hungary.

My interlocutors in the business community talk about another important factor in the investment and trade calculus.  That is, broadly speaking, the issue of the investment climate.  They often ask the questions:

Will Hungary treat my business fairly?

Will Hungarian courts be fair in resolving disputes and upholding contracts?

Is government decision-making predictable and transparent?

Is corruption a major concern in the country?

Will my business have a fair chance to compete in the public procurement process?

As many of you know, the U.S. State Department publishes an annual Investment Climate Statement that examines these exact questions for most countries around the world.  The 2017 Investment Climate Statements for Hungary and for the World are scheduled for release today in Washington D.C.  I can say the Statement for Hungary will present the significant advantages to investing and doing business in Hungary, many of which we’ve discussed here today.  It will also present some of the challenges that potential foreign investors face in Hungary–challenges such as corruption or unpredictability.

These issues are very important to American investors in Hungary – potential or actual, and they are a large part of the reason that we, the U.S. Government, frequently talk about the need for transparency, the rule of law, and effective democratic institutions.  We do that as a friend, as an ally, as a partner.

As the Investment Climate Statement will demonstrate, problems with corruption and transparency and arbitrary rule making do not exist in some separate, political sphere, distinct from the world of business and entrepreneurship.  In fact, they directly color the investment climate.

As I said earlier, we as Embassy are committed to doing everything we can to boosting bilateral trade and investment between Hungary and the United States.  We have a strong foundation to build on and a shared goal, and I see the potential for many more success stories to occur thanks to the work of Dr. Szabó and you all that will benefit both of our countries in the years ahead.  To get there, though, we must be honest and constructive when there are issues to be discussed, and I can say that the United States is committed to working with Hungary to address the challenges as a partner and a friend.

Thank you for the opportunity to speak with you today, and on behalf of myself and my team at the Embassy, we look forward to continuing the conversation in the days and months and years ahead.