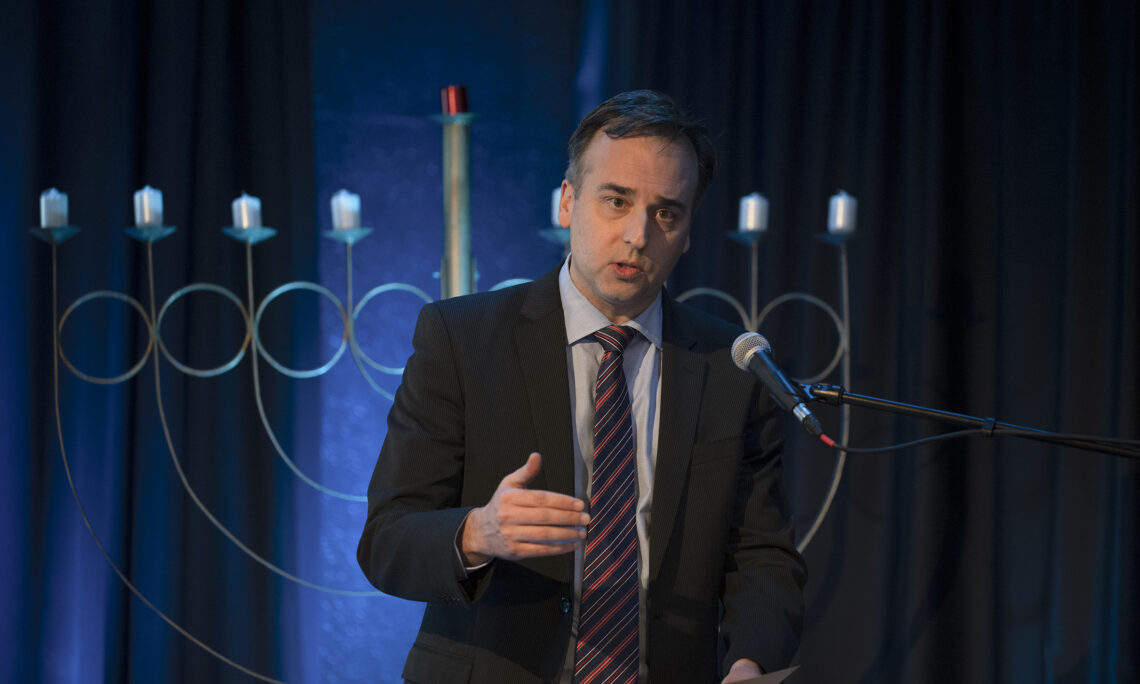 It is wonderful to be with you in advance of the festival of lights surrounded by innovators and activists from the Jewish community.  Thank you for inviting me to celebrate with you.

On this festival of lights, we gather at a time where it is often easier to see more darkness than light.

Russia has unleashed a war of choice next door, aimed at decapitating a democratic government and replacing it with Putin’s own breed of cruel authoritarianism.

We are collectively emerging from a global pandemic that had each of us living lives we never imagined possible – isolated indoors, cities shuttered, families struggling.

Closer to home, intensely important debates about the rule of law and media freedom are ongoing – in an environment that can seem hostile to individuals who express criticism or raise questions.

Yet, innovation and creation almost always begin with the acts of observation and questioning.

Asking questions, leads to clarity.  To light.  So, as we prepare to celebrate the “Festival of Lights”, it is fitting that we honor those gathered tonight, those who began with questions and sought to answer them through deeds, work, ideas – those present have served as beacons of light in a world that is sometimes far too dark.

I often tell people here that I am an optimist.  And, as you know, in Hungary optimism itself is sometimes viewed as an innovation.  But it’s true.  I’m optimistic about Hungary.  I am optimistic about the U.S.-Hungary bilateral relationship.  And, candidly, my now extensive conversations with senior Hungarian officials across the board, have only served to confirm that optimism.

We are friends, and we both believe in and are rooting for each other’s success.  Yet, the U.S.-Hungary relationship has become strained by political opportunism and expediency at a time where it needs nurturing and care.

Everyone in this room has a role in addressing this.  Whether you win an award, were nominated, or even feel you are unrecognized for your efforts, know that what you do can have meaning, and can address the largest of large problems.  It can bring individuals together, just as it can bring nations together.

In 1937, Albert Szent-Györgyi received the Nobel Prize for his efforts in isolating vitamin C.  I’m simplifying his work just a bit.  I hope you’ll forgive me, but I’m not a chemist and, as important as this research was, it isn’t the point of my story.

When war came to Hungary, it would have been easiest for Dr. Szent-Györgyi to lay low, continue his research, and live the life of academia.  But he didn’t do this.  Instead, he joined the resistance movement.  He helped Jews escape Hungary to avoid murder.  Adolf Hitler reportedly personally signed the warrant for the Doctor’s arrest and forced him into hiding from the Gestapo.

I’m not a particularly religious person.  I am a proud Jew – and I will light the Menorah next week with my family – but I find the divine more often in the risk taken by people to serve others, to tackle hard problems, to lift up the vulnerable and the weak.

Tonight, we honor some who have gone above and beyond to make their community, their country, our world a better place.  By recognizing them tonight we hope they will continue to lead and inspire.

Because whether you are the custodian of a relationship between great nations, or a teacher inspiring young Hungarians to ask questions, or a scientist figuring out something involving vitamin C, or a Rabbi inspiring a congregation to believe, let’s recommit to our individual responsibility to nurture light – whether it is the smallest flickering candle, or a great bonfire – let’s kindle that flame and use it to improve our neighborhoods and our world.

Thank you for having me.  Congratulations to all of the nominees for tonight’s award, and thank you for all that you do.