Home Főoldal | News & Events | Ambassador Cornstein’s Remarks at the Commemoration of the Placement of the Statue of George H.W. Bush 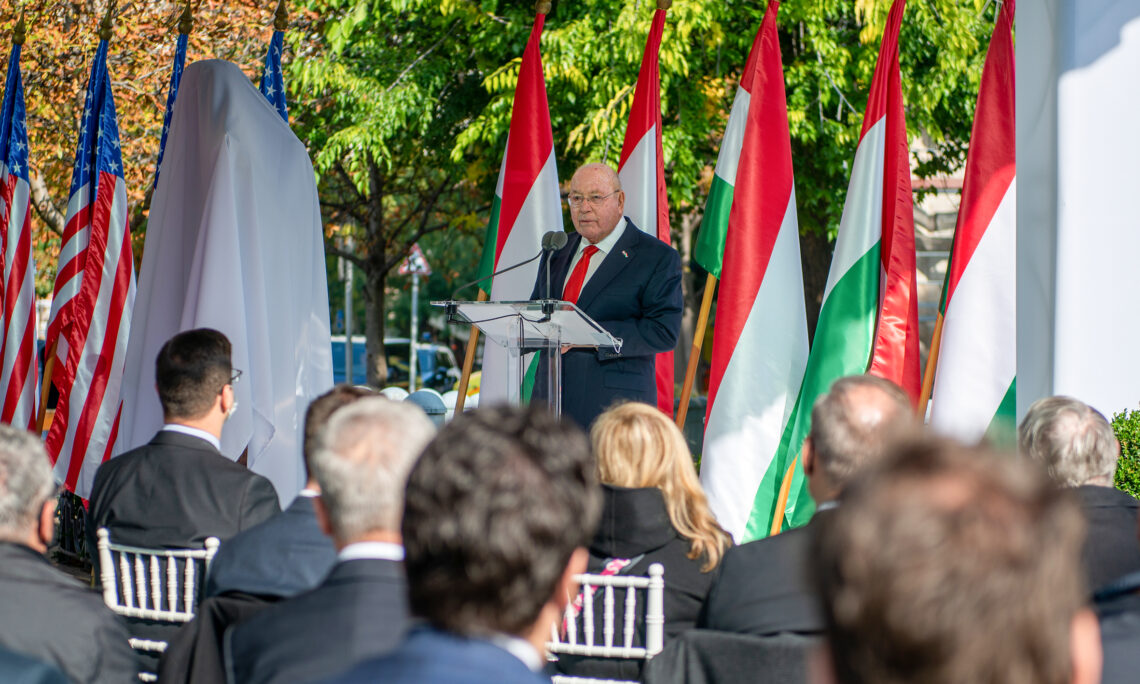 Thank you, Mister Prime Minister. Thank you, Ministers, dignitaries, excellencies, ladies and gentlemen for being here today. It’s an honor to be here with you all today on this historic occasion.

Mister Prime Minister, it may feel familiar for you to be on this square to inaugurate a statue of a U.S. President, as you did nine years ago with the wonderful statue of President Reagan that stands nearby. On behalf of the U.S. Embassy and our government I extend my deepest gratitude to you for honoring today another American hero of freedom, President George Herbert Walker Bush. And there could be no more appropriate location than here on Liberty Square, so close both to President Reagan and to the U.S. Embassy.

Many of those who watching today’s event at home, and some even in the crowd here today, probably were not even born when the Berlin Wall fell in 1989 and the Iron Curtain toppled across Europe, returning Hungary and so many of its neighbors to their rightful home in a democratic West.. While much has change since then, what happened then still defines our daily lives – in Hungary, the region, in the United States, and across the world.

For more than 40 years during the Cold War, the United States and our allies were locked in an existential rivalry with the Soviet Union and other communist regimes. Which system would prevail, dictatorship or democracy? Much of my life was lived during the Cold War, a time marked by mutual suspicion between the two superpowers, an escalating arms race, and fear of the outbreak of nuclear war with the Soviet Union. During those years, it was hard for Americans to travel behind the iron curtain and the average citizens of most communist countries were not allowed to travel to the West. But while walls and barbed wire could trap people in, they could not keep ideas out, including the fundamental truth that people everywhere yearn to be free: to speak freely, worship freely, vote freely, breathe freely.

That desire for freedom had never left the Hungarian people, and the collapse of communism in 1989 brought a new dawn to the hopes of freedom-loving people here and everywhere. President Bush’s visit to Hungary in July 1989 was a symbol of that hope. Today, we rightly honor a man who dedicated his life to lifting people up. From fighting in World War II to serving as Ambassador to China, as Vice President and later as President of the United States, he was committed to improving the lives of people around the world. Those here today who knew him can tell you just how deeply he cherished the freedoms we hold dear, and how well he understood the ennobling power of democracy. Being free is worth every sacrifice, he knew, and it comes with a duty to lift up others who also yearn for their own place at the altar of freedom. A modest man with extraordinary vision and compassion, President Bush helped the people of Central and Eastern Europe to free themselves from communist rule.

In short, President Bush has left a towering legacy, which we celebrate today and will honor forever with this statue. And it is right and proper that we celebrate as part of his legacy that he renewed the ties between Hungary and the United States to their rightful place as partners, which a decade later brought us even closer as Allies within NATO.

In the 30 years since the end of the Cold War, we have partnered with Hungary and the countries of this region. We have built a shared future based on common values and common goals. Our economies have grown together, with U.S. investment in Hungary supporting more than 100,000 jobs across this country. Our cultural ties are deeper than ever, not just because Hollywood loves to film movies here but because of our shared appreciation for the arts and intellectual exchange. And, of course, as Allies our sons and daughters have stood shoulder to shoulder and bled together in defense of our shared security. There is no greater  commitment than standing by an Ally in a time of need, and our two great countries stand together now stronger than ever before.

During my time here I have been honored to play a role in deepening that relationship, whether it was through completing a bilateral Defense Cooperation Agreement, or Hungary taking bold steps to fulfill its commitment to NATO’s shared defense, or working together to advance our shared priorities in the Middle East. But any successes we have had during my two and a half years in Budapest rest on the shoulders of giants like President Bush, who dedicated his life to sounding the clarion call for freedom across the globe.

It is in the spirit of that hope that we are joined here today. President Bush once said, “The anchor in our world today is freedom, holding us steady in times of change, a symbol of hope to all the world.” As waves of uncertainty cast us about – economic crises, rising threats from the East, this terrible pandemic – let us all recommit ourselves this day, and every day, to our shared love of freedom as the best hope, the only hope for overcoming those forces which seek to undermine our liberty and unity.

So, while this statue pays tribute to President George H. W. Bush, I see it also as a symbol of our bilateral relationship and of optimism for the future. President Bush is rightly recognized for the contributions he made to end the Cold War and support the development of democratic institutions. But his actions alone could not have wrought the change we see now. The Hungarian people chose to pursue a path of liberty, and it is right to celebrate today how far they’ve come in 30 years.

These ties of freedom – our bonds of alliance — benefit both our countries and far beyond. And so this statue is also a sign that through hard work and cooperation, we can and must continue on this path. Though I will end my time here as Ambassador at the end of this week, I will depart with full confidence that our future together is bright and without limits. Our common goals and our common values will continue to connect us, as they did for President Bush with the people of Hungary 31 years ago.