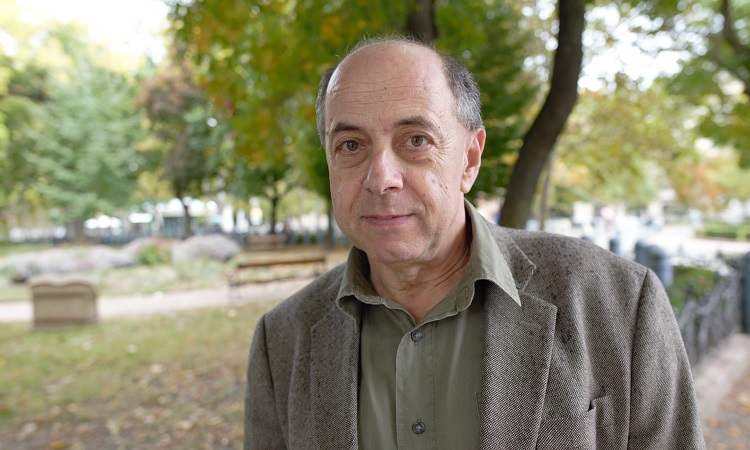 The International Writing Program at the University of Iowa is one of the most prestigious residency programs affiliated with writing one can imagine. Among the program alumni are recognizable and notable writers like Flannery O’Connor and John Irving, and from Hungary alone, writers like Magda Szabó or György Spiró. Among their ranks is András Nagy, teaching, editing, writing and mentoring students with great drive and passion. He was one of three mentors at our alumni creative writing camp this past summer. He dedicated his time to the participants, making sure they all learned and gained great memories about creative writing. Meet András, our alum of the month for October.

Please introduce yourself a bit and tell us what exchange program you participated in!

I started my career as a writer and a playwright. I became interested in the more general, theoretical questions that I couldn’t express in my stories, novels, plays and movie scenarios, so I started to share these issues in essays and study. That’s how I became more and more interested in philosophical and historical questions. I participated in the International Writing Program at the University of Iowa, during the golden age of the program where I was in a diverse and talented team and I am still in connection with some of its members. Last summer, the great writer Deborah Eisenberg visited me with her partner Wallace Shawn who is a playwright, actor, and philosopher. We became friends during the Writing Program in Iowa. I also participated in the university’s theater program and we created a documentary about it. Following this, I taught a masterclass for students. A few years later, the Fulbright Program supported my philosophical and historical research at the St. Olaf College Hong Kierkegaard Library. It is not just a library – it is the most important international research center for significant philosophical works and their impact of Kierkegaard.

Tell us about your exchange program experience.

Previously, I had been to America several times, but during the program I got to know a whole different America which was very appealing. Before the start of the International Writing Program, I got to know emblematic American institutions, and thanks to the program, I had the opportunity to travel across the states from New Orleans to Seattle. In addition to getting a different view on America, it was a great opportunity to make professional contacts – I’ve never dreamed of something like this. My horizons broadened extraordinarily fast. As a Fulbright Program participant, I learned a lot during my journey and stay in America where the entire program was exemplary and very well-organized. When I had a question, the answer immediately arrived from Budapest or Washington. In addition to that, the American Kierkegaard House Foundation contributed to the travel costs and helped me to find a home in the United States. It was a big issue while traveling with my family. Welcoming a Fulbright fellow was an honor for this little “liberal arts college.” It was an honor for me as well!  They did not just give me an office in a unique library, but I got keys to a building in which they preserved exceptional collections. I could work whenever I wanted even on weekends and at night. During the academic year spent there, I could revive my previous relationships and make new ones because this was a meeting point for researchers and scientists interested in Kierkegaard. The nine months stay in America was a wonderful experience for my family as well. For my children the atmosphere and the standards of the American school system was very appealing — they really enjoyed the trips to New York and the trips to the National Parks, and the beauty of the Pacific Ocean.

Please tell us about your job, what do you do exactly. How did you decide that this is what you want to do?

I lecture theater study courses in Veszprém, where as a dr.habil at the Pannon University, and I also teach in an international relations course in Kőszeg. In addition to these, I work at the Institute of Advanced Studies Kőszeg (iASK), which is a close partner of the university. I teach, do research, and write both fiction and scientific study works. I am not sure if I have chosen these topics or the themes or the questions have found me – sometimes I feel the latter is the case.

What do you enjoy the most in your job?

I am incredibly lucky: in fact, I enjoy everything. I love working with students — I get a lot of ideas, energy, and important feedback from them – both from the students of Veszprém and Kőszeg – who are mainly foreigners from all around the world.  The institution of Kőszeg has a very inspiring intellectual atmosphere, lectures, debates, and research which keep providing me with new perspectives regarding the questions I’m faced with as a researcher. I equally love sitting behind my desk all night long, being in the library or standing in front of a class. It’s hard to tell what I like the most – probably all of these combined.

What has been the biggest challenge of your career thus far?

The biggest challenge might have been leading a small, professional non-profit organization, the Hungarian Center of the International Theater Institute, which I first reformed, then lead several of its important initiatives to success – including a Hungarian-American theater exchange program, which provided outstanding Hungarian directors (such as Enikő Eszenyi, Róbert Alföldi and János Szász) with the chance to work in the Unites States, and from time to time, several American theater professionals paid visits to Hungary as well (for example Jim Nicola , leader of the New York Theater Workshop, Molly Smith, director of Arena Stage in Washington and director and producer Philip Arnault, who has been a great partner in my work). After all of that, I got the opportunity to be in charge of Hungarian Theater Museum and Institute which I also feel improved during the 5 years I spent there.

What is the proudest achievement of your career thus far?

Anyone who is as „addicted” to theater as I am obviously finds the biggest pride in applause, so this year, the round of applause after the entry of my piece during the National Theater Festival in Pécs was definitely one of the high points of my career, as well as all the recognition after my previous premieres in the past 35 years (the first one took place in 1984).

Can you talk about the work you do apart from your regular job?

I can’t really talk about such a thing, since all the work I do fits into the category of „labor of love” and what people call a „regular job.”  Something I’ve been passionate about over the past several years is the international reception of the Hungarian Revolution in 1956, especially in the UN. I’ve been interested in the controversies around this topic for a long time (I also wrote a book about Povl Bang-Jensen, a Danish diplomat who gave his life to Hungarian matters and played an exceptionally important role in the story), and recently – courtesy of Katalin Bogyay, UN Ambassador of Hungary – I had a chance to inspect documents that were not accessible to the public, which provided me with a new insight regarding the links and interdependences in the story.  My publication regarding this topic was also released in America, in the Journal of Cold War Studies (which is edited by Mark Kramer, a professor in Harvard who is also involved with matters on Hungary and was a guest of the iASK Summer School last summer.)

What are your current projects?

Something that is sitting on my desk and is in progress right now is a presentation in a conference in Szeged (I will talk about the Danube-Circle – and about an anthology I edited called Danube. An anthology – in which significant Hungarian writers are protesting against the constructon of the river barrage in 1988), and apart from this, I will also speak about Béla Pintér’s theater and drama during a conference in Eger. I’m handing in one of my studies on Kierkegaard’s effect on Péter Esterházy. After all of this is done, I’m finishing my book on the international reception of the revolution in 1956 – which I am also planning to publish in English – then I’m returning to the topic of Kierkegaard, since a lot of my questions remain unanswered.

What are your career goals?

I don’t have goals in my carreer – I have goals in my work. I’d like to get an answer to my questions regarding the topics mentioned above, but – as Esterházy said – we used to get answers to our questions, but nowdays, we question our aswers.

Do you have any advice for future exchange participants?

I don’t necessarily want to sound like a teacher, but being prepared is important, it’s crucial in America. Being open-minded is also an important factor, considering that they will arrive in a really open society and the colleagues abroad will also be really open. Keeping this up and returning this favor is essential. Building mental connections, looking for opportunities to collaborate is fundamental – we can learn a lot from one another. Finally, it’s necessary to also have a good time, since your work is only effective when you enjoy it.

As a leader in your field, what advice would you like to give to the next generation?

Giving advice is always risky – I believe more in examples that can be liked and followed by the upcoming generations. I’d suggest the youth find such a model for themselves and try to meet the expectations that they set for a „master” like that.