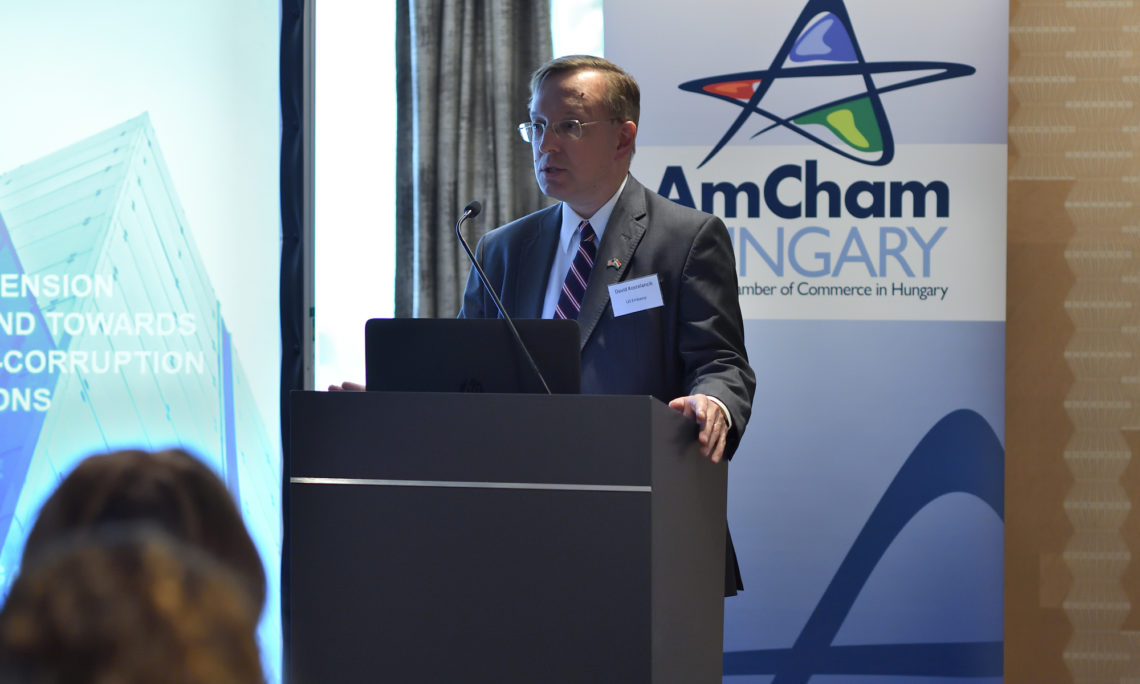 Thank you David, for your kind introduction, and thank you AmCham for the invitation to speak at this event.  Good morning, everyone. I am delighted to participate in today’s events, as the subject of corporate compliance is such an important one.  The work you all do in this field is critical to not only your company’s success, but to the maintenance of fair and open markets.

One of our top priorities at the U.S. Embassy is to increase trade and investment between the United States and Hungary, and I know that this is a priority for the Hungarian government as well.  We are committed to working with the Hungarian government on this, because we both know that investment and trade means jobs and economic development for both of our countries.  I am pleased that our bilateral trade has been on the rise and is now at more than $8 billion annually.

Our trade is growing because Hungary is an attractive place for U.S. investments.  Hungary has many qualities that appeal to U.S. businesses including its infrastructure, a skilled workforce, and its central location.   U.S. firms located in Hungary consistently praise the pro-business polices and cooperative attitude of Hungarian officials.  The head of a U.S. firm in Debrecen mentioned to me recently that the advantages offered in Hungary, including its fantastic human capital, have enabled him to grow his branch operation into the one of the company’s main manufacturing and research facilities in the world.

As we look to improve our commercial ties, we must ensure that future trade growth comes through commercial relationships that are compliant with U.S. and international law.  We can’t cut corners when it comes to compliance and corruption.  But this does not have to be a burden.  Compliant business practices that reduce risk and foster a level playing field fuel trade, investment, and ultimately economic growth.  Governments have a central role to play in this process, as does the private sector.  Hence why the UN, OECD, EU, UK and the U.S. have all established anti-corruption frameworks.

Here in Hungary, the U.S. Embassy enjoys a strong partnership with Hungarian law enforcement.  As part of the Organized Crime Task Force, our FBI works with the Hungarian National Bureau of Investigation to jointly investigate organized crime that affects both the United States and Hungary.  A recent investigation led to more than 30 arrests globally, including six in Hungary.

The International Law Enforcement Academy –ILEA – is one of the biggest successes of our bilateral relationship.  ILEA, a joint effort by the United States and Hungarian governments established in 1995, trains more than 1,000 law enforcement officials every year.  For example, in 2018, ILEA will host a five-part series of training seminars focusing on different aspects of corruption to law enforcement officers, judges and prosecutors from the region.

The U.S. Embassy also advocates for a free press and robust civil society sector, both of which are crucial to promoting good governance, transparency, and accountability.

Even with these efforts, we all know that corruption is a challenging, entrenched problem in the region and around the world, including in the United States.

Despite its compelling economic competitive advantages, Hungary is unfortunately gaining a growing reputation for corruption and cronyism.

These corruption risks are serious for Hungary, and we are very honest about them when we talk with our counterparts in the Hungarian government.  Many of these issues are addressed in the State Department’s annual investment climate report for Hungary.  In addition, the perception or reality of corruption has an impact on the talent pool here.  According to a recent survey, an alarming percentage young people now believe that in order to get ahead in Hungary, they must engage in corruption.  As a result, many choose to leave for other countries.

These corruption risks are also bad for business.  Some executives of multinational firms operating in Hungary complain that their businesses are uncompetitive in the local market because they are unwilling to take the irregular steps required to win business in the sectors that often favor insiders.  These concerns are understandable.  If your business is willing to take these steps, you not only risk possible legal action, but also contribute to the problem.

Today’s conference is about minimizing risk and vulnerability, and ensuring that your companies comply with Hungarian and international rules.  I encourage you to all share your best practices and to place compliance and transparency at the top of your business priorities.  It’s your responsibility to ensure that your procedures and controls are in line with the rules.

But I would also like to urge you to consider how, as a group, you can work together to promote increased transparency and fair markets in Hungary as a whole.  Here today are representatives of some of the leading companies in Hungary.  As a group, you have a powerful voice and can set a powerful example.   I cannot emphasize this enough.  As a group, you can all make a difference promoting more transparent, fair, and open markets in Hungary which will in turn incentivize greater investment, growth, and success for us all.  At the U.S. Embassy, we are ready and willing to support initiatives that contribute to these goals.

Thank you.  I hope you all enjoy today’s event.